So What’s with all the Vegetables?

And various other edibles?
(Except the animals,I don't eat them,
just like to pet and paint them:)!)
Well... it’s a project and “visual research” for a future painting and an upcoming exhibition at “Field Projects”. “Field Projects” is a parallel exhibition space located at Blue Horse Arts Studio. We will be holding an Invitational/Open House exhibition called “Crop Circle”  on October 28th, Friday from 7PM-9PM.The “Crop Circle!” Exhibition will feature invited artists working various disciplines who have created pieces inspired by the local farmers and merchants who engage in sustainable agriculture. The focus of the show is to create a dialogue with viewers on the importance of maintaining and promoting local agriculture through a visual art format and to raise environmental awareness on the effects of industrialized agriculture on our planet. Artists who are participating in this event have generously agreed to donate a percentage of their sales to the Watertown Food Bank. (More about that later!)

For more info on why we should support Local Food  see the links below
http://michaelpollan.com/
Michael Pollan on Local Food
http://www.youtube.com/watch?v=DhaG_Zi6izU&feature=player_embedded#!


A Little Seemingly Unrelated Background
I recently went to an interesting lecture at the Osher Life Long Learning Institute at the University of Connecticut where I will be teaching a watercolor class this week.

(OLLI is a very cool organization run by some equally cool individuals(Thank you Rita Quinn and Dr.Brian Chapman for inviting me into this experience!). I highly encourage those interested to explore what it offers!) http://www.waterbury.uconn.edu/osher/

The lecture I attended was on “Creativity” given by Steven Dahlberg of the  International Center for Creativity and Imagination.


Steven Dalhberg’s site http://www.appliedimagination.org/
A  semi “synchronistic” event happened upon the initiation of the presentation. I say “semi” because when one is talking about creativity, synchronicity isn’t an unusual occurrence. Each participant was given a quote on a piece of paper to discuss with a stranger. Interestingly the quote I received was from Clark Moustakas. Moustakas is a prominent researcher in the fields of humanistic and clinical psychology. His form of “Heuristics” (a qualitative social research methodology) was a reference source on methodology that I used for my own “practice based art research” in Singapore at the Nanyang Technological University( NTU), where I contended, in a peer reviewed paper, that painting is and has been a legitimate form of rigorous research based on the intuitive and analytic processes of artistic thinking.Creativity also requires a playful attitude. (Just because it is fun doesn’t mean it’s not rigorous or intellectual. Don’t scientists have fun :)?

Synchronicity link
http://www.flowpower.com/What%20is%20Synchronicity.htm
Mr. Dalhberg’s  focus was on illuminating that “creativity” is not just for the “artistically” inclined, but a way of thinking that all of us innately engage in at many levels in our day to day lives. I, and many others in the creative industries and art education, agree with this idea.  My personal belief is that the practice of drawing or painting can be a way of becoming aware of and accessing this type of thinking.The process of learning how  "to see" through developing observational skills and reflecting on the subject is one way of learning how to pay attention and work through preconceived notions. New ideas and conceptual concerns naturally evolve from this place of attention. The artist’s direction manifests from reflectively or "reflexively" discerning what the compulsion is behind imagery one is attracted to and the physical experiences that they are engaged in.It is a process I try to infuse in my teaching whether or not the student is interested in pursuing art as a career.
Earlier this spring I also had the privilege of being an invited lecturer at OLLI. The lecture topic was on my pedagogy and practice-based art research in Singapore at Nanyang Technological University (NTU).  For those of you who are unfamiliar with practice-based art research it can be defined in short, as an art process that produces new knowledge and uses a methodology. This is a working definition of this process which continues to evolve as the literature develops within the field. The qualitative methodologies that are often incorporated in this genre are often sourced from the humanities and the social sciences.
The presentation I gave at OLLI described the series of "seemingly unrelated events" that led up to the conception of my project and hopefully shed some light on research based visual art-making at the university level. (See images for further information on this) 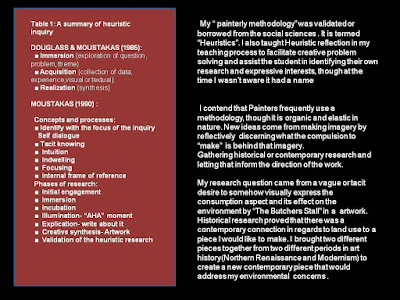 My work,  past and present, is primarily engaged with environment in one form or another.The body of work I developed in Singapore incorporated my transplanted experiences of a new culture and urban environment and connected it to my previous work in the landscape and farm animal paintings. I received a grant from the university to complete the work on my series  entitled “Glut” which   examined  the connections between food, culture, and the environment.

Getting to the “Meat”
of the
Matter

My initial impulse to create the “Glut” series started from a vague or tacit desire to somehow use the inverted still life painting “The Butcher’s Stall” by 16th century Flemish artist Pieter Aertsen, in an artwork that pointed to contemporary environmental concerns in regards to the effects of industrialized agriculture on our fragile ecological systems.I had an interest in this painting for several years in terms of why it was made, how it was made, and how I could bring into play in a contemporary setting.
(Click on images for further information) 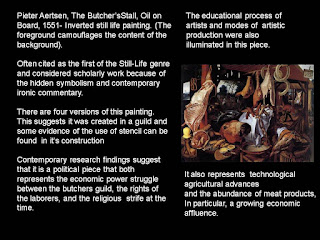 That initial impulse combined with a series of “lived experiences” I encountered in Singapore led to the creation of the painting” Conversation with Pieter and Paul”. 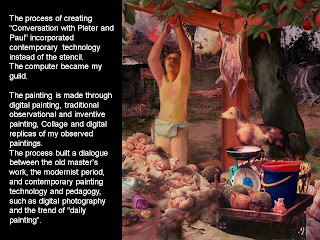 Some of the "lived experiences" that I encountered were the discovery of the Tikka Market.The Tikka Market is an historical wet market and butcher’s stall in the Little India District of Singapore that I came upon quite unexpectedly while exploring my new environment.Something quite different than any previous grocery shopping experience that I had ever encountered!Another such experience was living through the 2006 “Haze”.

The "Haze" was a period of incredible smog that resulted from the agriculturally directed burning of the  the Indonesian rainforest and bog-lands. This resulted in a  nearly 10 percent increase of carbon emissions into the atmosphere during that period of time when the burning was occurring.The conjunction of those two experiences became the seeding events for the painting "Conversation with Pieter and Paul". 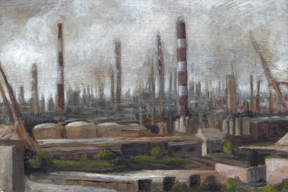 The process of creating the “Glut” series,
and in particular, the combined media painting

“Conversation with Pieter And Paul,” also
resulted in several off-shoot series evolving
from the visual/literary research that was
continuing to inform the piece during its creation.
Those series being the "Tree Series" and "Replacement Forest".
A VISUAL FEAST
Sharing Food
and Stories
Concurrently a corollary project developed with  some very talented animation students at the School of Art Design and Media (A.D.M.) at NTU called “A Visual Feast”.

These undergraduate artist/ researchers were some of my former foundation drawing students who were keen to explore traditional observational painting practice in order to more deeply inform their digitally produced works.
(Click on the slide for larger image)

The “Visual Feast” project’s intention, in short, was to uncover the personal mythologies surrounding the food culture of Singapore, and in particular,  the food items that were considered luxury commodities.In the beginning of the project there were  lengthy discussion on the environmental aspects of agricultural practices and the environmental  impact of the increase in meat in the Asia diet.The student researcher’s initial direction involved gathering historical and contemporary information derived from Singaporean food culture to more authentically inform my work. This is the nature of undergraduate research. My intention was for the students to find a way to develop their own research questions or narratives through a painter’s approach to qualitative research. A deepening awareness of the ecological impact of  culture and food production would  hopefully be an outcome of the study.
The platform of observational still life painting was utilized and eventually recognized as a form of heuristic methodology.  The small paintings of their own selected food subjects became invitations to  inter-generational dialogue with their families and a wider audience through a web based platform. Hopefully it became a creative problem solving tool for them to use in their future art explorations.


SO WHAT'S WITH THE VEGETABLES?
(Congratulations if you made it this far!)

Essentially I am continuing in a community based "research" vein with this Farmers Market project. My own still- life, landscape, and animal paintings are studies for a forth-coming version of the "Conversation with Pieter and Paul". There are two of four planned pieces completed at the time of this writing. These studies are also invitations to dialogue.Through a creative engagement with community in a variety of platforms, such as "side of the road" conversations when out in the field, this blog, and the “Field Projects” exhibitions at Blue Horse Arts.It is my intention to promote awareness of the intertwining of food,culture, and the environment and invite discussion on our own local food culture.

For a high resolution view of "Conversation With Pieter and Paul, Holyland" this piece Click on the link  http://www.celesteprize.com/index_en.php?p=opere&l=eng&isearch=bridget%20grady&st=&ppp=all&naz=all