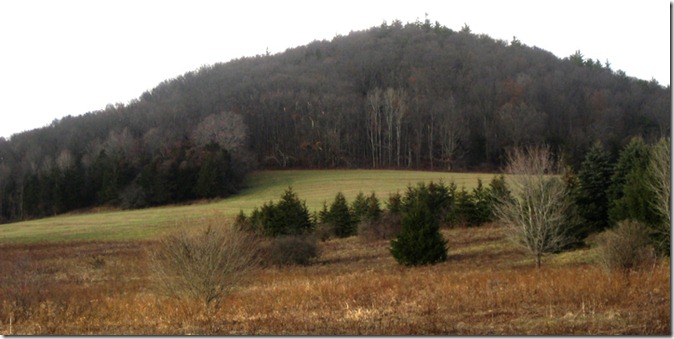 The View From Randy Orzano’s Studio 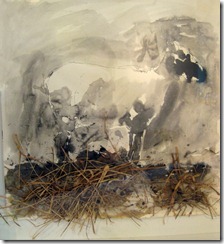 Traveling northwest to the foothills of the Berkshires in Sharon Connecticut last week with fellow artists Dianne Parmalee and Marc Chabot, we went in search of the farm inhabited by artist Randy Orzano. The goal of our expedition was a studio visit to the upcoming featured artist in the Flanders artist lecture series and “ Art of the Earth” challenge.This art and environmental education outreach initiative, conceived by education coordinator and farm manager, Dianne Parmalee, will focus on  raising an awareness to specific issues concerning the environment. The first such challenge will center on the plight of our pollinators who are critical to both maintaining biological diversity and our food supply. 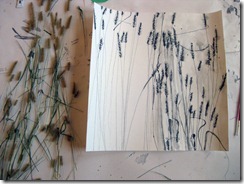 This year marks the 50th anniversary of Flanders Nature Center and Land Trust. Flanders  has always had an strong connection in the arts with an active committee of art professionals. Art has now been  formally included  in its official mission statement. This is much in keeping with the vision of its founder, artist Natalie Von Vleck and opens the doors to an expanded program for adults in the coming year. This will  include events that highlight the connection between art and the environment. (I'll be posting more on that in the future).Mixed Media Drawing by Randy Orzano 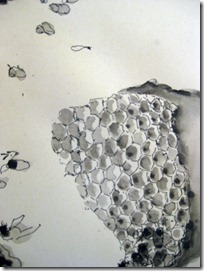 The work of Randy Orzano reflects the vision of this conversation with nature through art- making.  Both a beekeeper and an artist, Randy works in the true spirit of collaboration with nature. His studio, where he prepares his mixed-media pieces, is located at the base of what once was an ancient mountain.  It is a sentinel presence guarding the edge of a patchwork of tawny fields. These most ancient geological formations make up the character of Northwestern Connecticut. Worn down through the ages from majestic peaks formed by the crashing of continents a half a billion years ago, into the gentle hills we find today. It is a reminder of the passage of time.  Such is the vista from the window of Randy’s post and beam studio. The cool light of the December sun is warmed in a space that is lightly fragrant with honey and wax that is produced on the Sharon Valley Shepherds Farm. Mixed Media Drawing by Randy Orzano 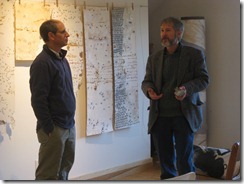 Randy works in tandem with the some of the residents on the Orzano’s farm creating delicately, poetic mixed -media drawings.  He described, in our studio conversation, how this way of working evolved. Previous to this series he was involved in portraiture. Working from predominately photographic reference he said, “I just hit a wall” and needed a new direction that would more authentically address the things in his life that he held as meaningful. Randy Orzano and Marc Chabot (Curator for Flanders Nature Center and Land Trust) 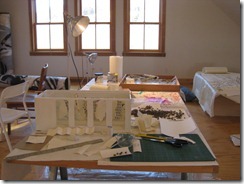 This new direction emerged when he was working on some drawings of his children and let them make their own drawings on the pieces.
This playful collaborative evolved and continued over a period of time. Eventually he was able to synthesize his concern with the state of nature and the process work with his children into his current insect collaboration. Randy Orzano’s Studio 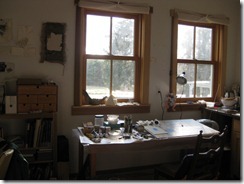 Initially He experimented with placing drawings in the hive and let nature take its course. He says he actually forgot about those first drawings and that it was his wife, Gretchen, who was the one to first retrieve them after being in the hive for several months. From there a new process and way of conceptualizing his work was born.
Randy Orzano’s Studio 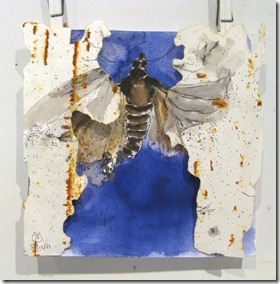 The process entails creating perceptual drawings of the creatures he works with, in this case the bees.
Randy then places these drawings directly into the hive. The bees “work” the paper through chewing and leaving their “mark” whether that is wax deposits or propolis.
(Propolis is is a botanical resin used for sealing small areas in the hive for protection. It comes in a variety of colors depending on the region where the honey bee is collecting and the plants it collects from).
Mixed Media Drawing by Randy Orzano 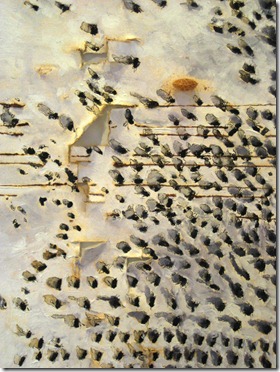 Randy will be presenting at Flanders in late spring He is in a group show at the Hotchkiss Library in Sharon, Connecticut in April. The show opens  on April 7th. For information on hours and directions  please visit the library's website. Hotchkiss Library
Randy Orzano can be reached at: rorzano@comcast.net or 860-364-0592
For more information on Sharon Valley Shepherds Farm and to get some really gorgeous honey, adorned with Randy's drawings visit Gretchen Orzano's beautiful blog.
For information about Marc Chabot please visit his website www.mcfinearts.com.
Mixed Media Drawing by Randy Orzano 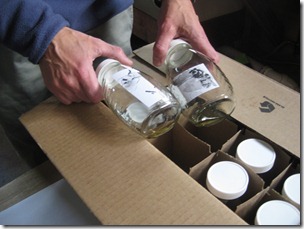 For more information on the state of the honey bee please visit the links below.
Connecticut Beekeepers Association
Bee article and about the effects of pesticides from the Natural Resource Defence Council

Randy recommends the a good read and some additional links