Artist Jim Toia and his lovely wife stopped by last weekend while we were "horsing around" in the studios to pick up his installation Bees Echo the Moon.
Our  own resident sculptors (A.K.A. the Beavers) were out and about, privileging our guests with an unusual day time  insight into their own working process.


Jim's had a busy summer with his Petri Island Project in Florida and his culminating exhibition at the Studios of Key West. Wish I had the chance to catch this show this summer!

Jim's has another exhibition coming up a little closer to home at  the Kim Foster Gallery in NYC.  The exhibition titled "Everything's Fine", is a showing of  his mushroom spore drawings.

Jim Toia has scoured the earth for years, examining the forest floor and collecting specimens for his art. Toia's method has been to find and expose characteristics in nature that are often unappreciated by the casual observer. What lies beneath an ant colony hole? How does a mushroom distribute its spore? Does a spider weave the same exact web time after time, and is it genetically coded to do so? Over the years, Toia has developed ways to capture such actions and structure, and unveil them to the viewer.
His new series of inky cap paintings follows that same line of inquiry. However, where Toia's earlier work kept a "hands off" policy, the new series introduces the artist's hand, manipulating nature and defining a new chapter in his artwork. 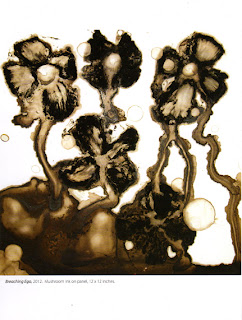 Inky caps slowly dissolve into a liquid form rather than expel dry spore into the air. The resulting staining that occurs creates an opportunity for Toia to alter and influence the process. The slow distribution allows the artist to manipulate the ink to flow in a specific direction, enhancing the end result. He continues to expose nature's tendencies, but now the viewer has the opportunity to look further into the artist's mind.
This is Toia's seventh solo exhibition at the Kim Foster Gallery. His work has been reviewed in numerous publications including the NewYork Times, Art in America, Sculpture Magazine,Time Out, Star Ledger, Philadelphia Inquirer, and Village Voice. Toia has just completed a artist-in-residency at The Studios of Key West with a collaborative installation that included over 1000 participants.


Article on the Petri Island Project

An island, defined by about 1,000 Petri dishes
BY GWEN FILOSA Citizen Staff