Right here in Connecticut we have an excellent resource for those interested in the art of natural history. The Yale Peabody Museum is a jewel in the crown of Connecticut museums. In a recent article in Connecticut magazine, I was pleased to see that the Zallinger piece was on the list of top 10 of works to go see. This is a heartening change in the wind of contemporary attitudes towards what is considered important work.  The painting by Rudolph Zallinger, “Age of the Reptiles,” is a classic in the art of natural history painting. The fresco mural took about three years to complete. During that time Zallinger underwent a crash course in paleontology and comparative anatomy. Because of his research in the painting and the importance it held as a contribution to the field of natural science, Zallinger was the first nonscientist to receive the Addison Emery Verrill Medal, an award that honors individuals in the arts of natural history and the natural sciences. The museum's website and exhibition provide excellent information on the how the work was conceived and executed.
The “Age of the Reptiles” is iconic in the subject of paleontology as is his “March of Progress” as it is indelibly etched upon the public consciousness in visualizing evolution. Zallinger’s piece exemplifies the form of science visualization of his time and this classical approach continues to be relevant . Consideration of this work and its impact on how visual imagery influences society, brings home the call of science to the arts as suggested by scientist E.O. Wilson.  E.O Wilson, for those unfamiliar with his work, is a professor emeritus at Harvard University. He is a two time Pulitzer Prize winner for general non fiction . He is also the originator of the terms "biodiversity" and "biophilia" now in common use in our language.  E. O Wilson himself practices illustration. He was the illustrator for his seminal work on ants in which he created 5000 drawings himself. In a “Life on Earth” sound journal interview with Diane Toomey with E.O. Wilson, Toomey stated, “It did occur to me, looking at these amazingly detailed, fine drawings, that in order to be a good scientist, one had to be an illustrator.” In reply to this query, Wilson stated, “…I realized that I wasn’t going to climb this Mount Everest of ant taxonomy unless I just put a large amount of personal effort into the drawing”.( See the interview transcript here  http://www.loe.org/shows/segments.html?programID=03-P13-00050&segmentID=3)
Other artists have influenced the direction of scientific study in the field of natural history and also in the fields of medicine, both veterinary and human. Georges Stubbs’ engravings and research into the anatomy of the horse greatly influenced  veterinary procedures on horses at the time. Likewise in contemporary medicine, cardiologist Frances Wells of Papwell Hospital in Cambridge, has used Leonardo DaVinci’s anatomical drawings of the heart as a direct inspiration for a pioneering mitral valve repair procedure. The list is long both for the interaction of art to science and vice versa.I believe strongly in the training of observational drawing for science practitioners and those interested in a possible career in those fields.
I studied for a year and a half at Paier College of Art in Hamden and the Peabody was the destination of choice when understanding part of the legacy of instruction there. The museum is a rich resource for artists seeking research subjects. The dioramas and taxidermy are more intimately accessible for study than the American Museum of Natural History. It is less crowded and one can get closer to the specimens.The only drawback is it is bit dark for drawing in some of the areas. It also contains a number of excellent landscape backgrounds by painter James Wilson Perry.
Here are some links of interested in related subject matter
James Perry Wilson link
http://archive.peabody.yale.edu/james-perry-wilson/chapter1-early-years.html
Contemporary artists influenced by Scientific illustration, Diorama, and Taxidermy
Walton Ford- Contemporay painter, one of my favorites influenced by Audubon
http://www.pbs.org/art21/artists/ford/
http://www.paulkasmingallery.com/artists/walton-ford/
Alexis Rockman- work informed by natural history representation and the confluence of art, science and culture.
http://www.viewingspace.com/genetics_culture/pages_genetics_culture/gc_w02/gc_w02_rockman.htm
Lauri Hogin- http://lauriehogin.com/new_work.htm
Walter Potter
Very Weird stuff from the early 1900's.
Victorian- http://www.acaseofcuriosities.com/pages/01_2_00potter.html 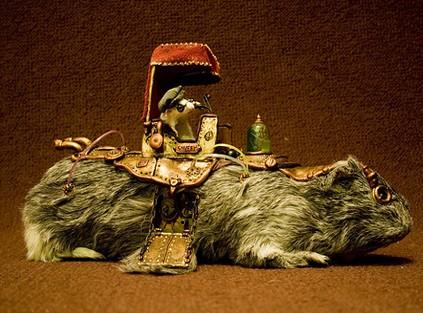