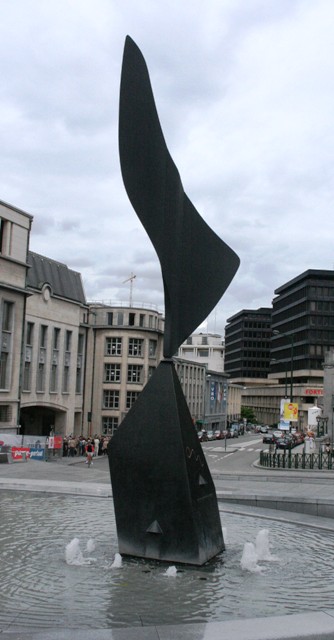 Local Arts and Artists Trivia
Today, according to the Google Doodle, is the 113th Birthday of Alexander Calder. Calder was a longtime resident of Roxbury, Connecticut. He is most well known as the highly influential 20th century sculptor and originator of the sculptural forms of the Mobile and Stabile. A local metal fabrication company, Gowans-Knight Co. had a hand in assisting Mr. Calder  in  the fabrication of his sculpture. The monumental sculpture titled the Whirling Ear manufactured in Watertown, Connecticut was placed in the at the U.S. pavilion for the 1958 World’s Fair in Brussels.
For more info on Alexander Calder check out the Calder Foundation at
http://www.calder.org/foundation.html
photo credit www.brusselsdailyphoto.com