And Now For Something Completely Different :) 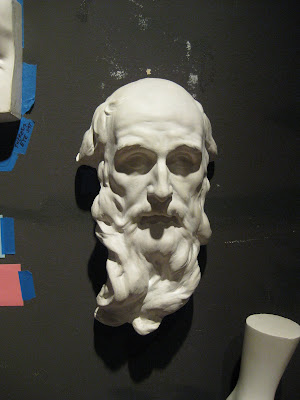 I’ve been working down at Grand Central Academy with Scott Waddell this past week furthering my study of classical drawing. Scott is an amazing artist and excellent instructor. I have found that to be the case with the entire faculty that I have encountered there. The program is based on the rigorous study of form and perception built upon the training of the 19th century French academic tradition. Though based on pedagogy from the pre-modern era, one would be very remiss in thinking that this school is purely reactionary or closed in its thinking. The artists there, both students and teachers, are extremely talented and come from a variety of backgrounds. Artists who work in abstraction, educators, animators, interactive designers, and illustrators to name a few of the professionals that I have come across in the forest of marble casts. All with attention lasered on the tip of a needle sharp pencil. Check out Scott's website at www.scottwaddellfinearts.com.
http://www.scottwaddellfinearts.com/
The summer workshops offer an opportunity for rigorous study to those who are not able to attend the full four year program in New York City. Artists come from around the world and throughout the U.S. to study there. In this summer session alone I have met artists, both students and professionals, from Spain, Thailand, Portugal, Canada, Idaho, Florida and California. Previously I have met artists from Australia, Brunei, Mexico, and Germany, along with myself traveling from Singapore at the time.
This place is Nirvana to those who relish the slow pursuit of excellence in an intellectually stimulating and supportive environment. Did I mention slow? The figurative drawing convention of the 20 minute pose falls by the wayside here. Most figure studies are approximately two weeks to a month in duration. All day. Five days a week.

There is a great article on Jacob Collins in the June 27th issue of the New Yorker Magazine by Adam Gopnik. Jacob Collins is the founder (and an artist extraordinaire!)  of the the Water Street Atelier which eventually grew into The Grand Central Academy.
http://grandcentralacademy.classicist.org/